Vanessa (Gutierrez) Webber studied ballet and modern dance with Portland School of Ballet, Ram Island Dance, Boston Ballet, Walnut Hill, and other schools across the country. During her time as a professional dancer with Portland Ballet Company, she performed numerous soloist roles in performances such as The Nutcracker, Swan Lake, and many world premieres of classical and contemporary ballet works. Vanessa has also performed with prestigious professional dance companies including Prometheus Dance and American Ballet Theatre. Vanessa studied for two years at The Boston Conservatory, training and performing as a dance major before beginning her studies in physical therapy.

In 2005, Vanessa rediscovered her passion for dance and became more in touch with her Latin heritage when she began seriously training in salsa dancing. In September 2005, Vanessa was invited to train and perform with a semi-professional team where she quickly moved into a professional group by 2006. She was one of the original founders of Rumba y Timbal in Boston, where she taught and choreographed all levels and age ranges, and managed class registration and the ladies performance team.

Vanessa’s acting credits include her musical theater performance as Iris Kelly, the starring role in the musical FAME. She was also cast as an extra in the movie The Boondock Saints.

Vanessa moved back to Maine in 2011 where she continued to dance until she took a brief hiatus to give birth to her beautiful daughter. She is the founder and director of Alma Cubana Dance in Portland, Maine where she offers classes in salsa, bachata and ladies styling. Vanessa joined the Kennebec Dance Centre faculty in spring of 2017. 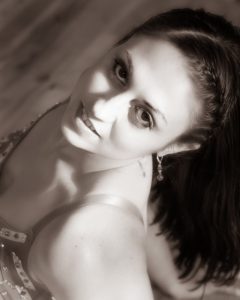