Kennebec Dance Centre Owner and Artistic Director Renée Black is thrilled to find herself back “home” at KDC, where she first discovered her love of dance many years ago.

In her 28 years of dancing experience, Renée has traversed many stages and studios across New England, in New York City, and in Helsinki, Finland. She has danced principal roles in several famous ballets including Giselle, Cinderella, Coppelia, and The Nutcracker, as well as many principal and ensemble roles in both classical and contemporary ballets.

Renée is a former principal dancer of Bossov Ballet Theatre and a 2002 graduate of the BBT program at Maine Central Institute where she studied under the direction of Founding Artistic Director Andrei Bossov.

As one of six Americans selected to compete in the 4th International Ballet Competition in Helsinki, Finland in 2001, Renée was gifted the opportunity to train extensively with ballet masters from all over the world.

Later in the same year, Renée studied at American Ballet Theatre in New York City where she trained with renowned instructors and performed in an excerpt production of Swan Lake as staged by Leslie Browne.

While attending Simmons College in Boston, Renée traveled to Maine to perform with Portland Ballet Company and Bossov Ballet Theare. After graduating in 2006, Renée moved back to Maine permanently and began her marketing career, and simultaneously, her career as a ballet instructor.

Renée has extensively studied the Vaganova teaching method, as developed by Russian dancer and teacher Agrippina Vaganova, and largely uses this method in her classical ballet technique classes.

In September of 2016, Renée became the new owner and artistic director of Kennebec Dance Centre. 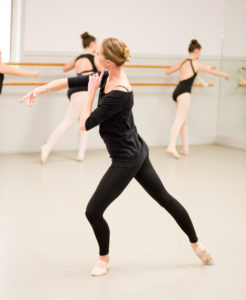